Dr. Mark McLaughlin commenced practice as a General Practitioner in Greymouth, and was very much a local presence for the 22 years he served the community. 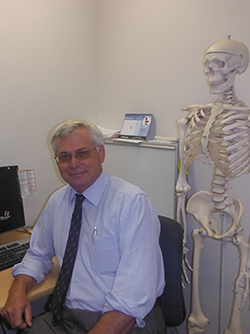 Mark says of his early days in Greymouth:
“Initially, starting out, I literally drove to Greymouth and set myself up as a solo General Practitioner, with a clinic attached to my home. The practice outgrew my home so I purchased new rooms and established a group Practice, which became the main Practice for Greymouth.

As the Greymouth practice continued to grow, Mark found there was not enough time to devote to his Specialty, so the decision was made to relocate work and family to Christchurch, both for his family and to allow Mark to specialise.
The Greymouth group practice has continued to flourish.

On arrival in Christchurch Mark joined a Christchurch based sports-focused practice, to offer his expertise in Musculoskeletal pain conditions.

The change came when Mark made a break from sport-focused medicine to launch his own practice.  Mark says this about the launch of his Christchurch based MUSCMED clinic:
“I needed to have more control of the processes involved in diagnosis and treatment. I had a vision of how I wanted to run a musculoskeletal clinic and MUSCMED is the realisation of that vision. MUSCMED was launched in April 2013, and is a culmination of my many years as a Musculoskeletal Specialist.”

Most of Mark’s current patients come to him through referrals from other Specialists, General Practitioners, Physiotherapists, Chiropractors, Osteopaths and Podiatrists from around the South Island.  He has also set up a clinic in Ashburton and is available by appointment at these two locations.